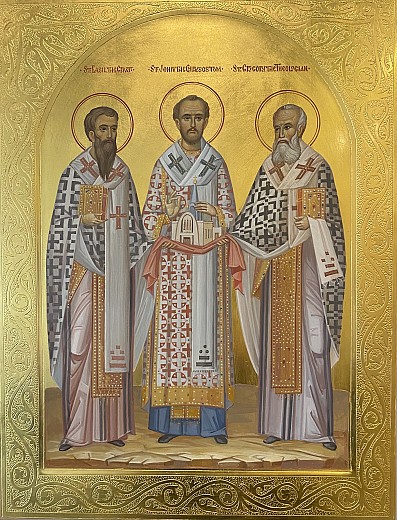 Three Saints beginnings could be traced to the end of the last century with immigrants fleeing the Slavic nations (Northern Europe to Southern and Central Europe) to escape religious, cultural, and political persecution that was overbearing in their countries and to better their economic status.

In 1890, a small group of people from Ansonia, mostly from Austria-Hungary and Galicia, formed a group in order to observe their religious teaching.  The Brotherhood of St Vasily the Great was instrumental in securing the services of a pastor from neighboring cities, mainly Bridgeport and New York.  Services were held sporadically on Sundays and Holidays in various rented quarters.

On January 1, 1895, the organization formally petitioned Bishop Nicholas of the Aleutian Islands and Alaska to accept the group as a congregation.  From its humble beginnings as a congregation in 1895, the Society struggled to maintain the Church.  The society was not content to exist in rented quarters and in 1899 purchased a parcel of land on Howard Ave and Crescent St and erected a new church edifice.

The Church was built mainly by the men of the parish who labored on the church property after their day’s work was completed in the local factories.  In 1900, Archimandrite Raphael blessed the cornerstone.  The Church, formally dedicated in October 1900 by Reverend Ptolemey Timchenkoff, remained under the guidance of the St Vasily Brotherhood until 1903.

In 1903 the Brotherhood deeded the Church properties for the sum of one dollar to the Russian Orthodox Greek Catholic Three Saints Congregation.  This was the beginning of the Three Saints Orthodox Church.  On October 4, 1904, the parish incorporated itself under the laws of the state of Connecticut.

On January 25, 1954, tragedy struck.  A flash fire completely gutted the interior of our House of Worship.  This fire intensified the parishioners’ desires to see completion of the long planned building program.  February 1954 saw the largest body of parishioners attending a parish meeting in the Ansonia High School Auditorium to approve plans to construct a new edifice.

Ground blessing ceremonies with His Grace, Archbishop Dimitry of Boston officiating took place on July 25, 1954; on November 20, 1955, the first Divine Liturgy was held in our new Church.

The Church edifice today is itself testimony to the glory of God, with its marvelous and inspiring iconography by Pimen Sofronov.  That same edifice, built to replace the former Church destroyed by fire, is the proof of Christ’s words:  “With God all things are possible.”